Kenny Pickett is a 23-year-old quarterback who is changing the landscape of football. Many in the pay per head bookie industry believe that Pickett will be the first quarterback that will be selected in the 2022 NFL Draft. But it looks like Pickett will be known for something more, and something a little more permanent. A rule will be changed because of him, so it will be called the Kenny Pickett Rule. Well, it won’t really, but you know that people will be calling that for a long time.

During the ACC Championship Game, Pickett ran for a 58-yard touchdown. Recently, efforts to protect quarterbacks resulted in stiff penalties for defenders who will hit a sliding quarterback. So naturally, when a quarterback slides, players are to avoid them. 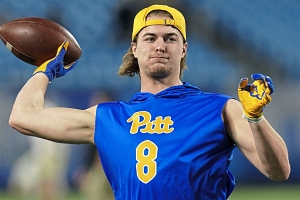 I think you know what happened by now. In fact, its genius is in its simplicity, I’m surprised it has not happened earlier. Basically, Pickett faked the slide. Players avoided him, and ran 58 yards for the touchdown. Of course, the NCAA is getting involved, as the faking will cause an unfair advantage to the quarterback.

So now, officials are saying that if a ball carrier begins, simulates, or will fake a feet-first slide, the ball should be declared dead at that point. The rule on sliding was made to protect players, and not to be used as a way to compromise the defense. It was a fun game, and a smart play by Pickett. If you are into NCAA football betting, you may want to consider earning more by learning how to be a bookie.

Get the Best Sports Betting Software for Bookies Here!