The Atlanta Braves Win the 2021 World Series against the Houston Astros after 6-game series. For baseball and baseball betting fans, the MLB World Series is the biggest event and this year was no exception. No one thought the Braves would win their division let alone the World Series. However, last night they did it despite all odds.

According to the latest sports news, the Atlanta Braves won the World Series 4-2 out of 6 games. Throughout the entire series, the Braves had the lead against the Astros despite being the starting underdog. However, that did not stop them from stomping on the Astros through and ending the World Series before game 7. 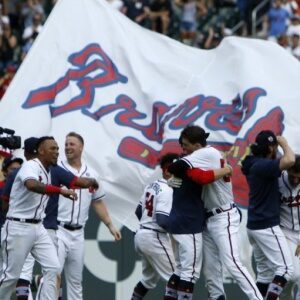 For Braves fans, this momentous event took 26 years to achieve. This is because the last time they won the MLB World Series was in 1995 after defeating the Cleveland Indians. According to many sports betting odds websites and handicapper, this was an improbable victory for the Braves.

First off, at the start of August, the odds did not look good as they have a losing record. However, the team did well and by mid-August, they had enough wins to secure first place in the NL East. On the other hand, critics of the Braves said they still did not stand a chance. This is because they still had to compete against the NL West superpowers.

However, despite the long odds they made it to the MLB playoffs defeating team-after-team. First, they took down the Los Angeles Dodgers whom they had lost against in the 2020 series. What makes their victory impressive is that they without their best position players and pitcher for most of the year.

In Game 6 of the World Series against the Astros, Atlanta took a huge lead in the third inning. This is thanks to a three-run blast by Jorge Soler. Soler, is without a doubt the World Series MVP with his biggest home run during Game 6.

Afterwards, the Astros could not gain any ground with Atlanta slowly increasing their lead. By the end of the ninth inning, the Braves had 7 runs while the Astros had none.

Atlanta will be celebrating this Friday with a celebratory parade for the team.