Inter Milan was coming from a defeat last weekend. However, the defending Serie A champions remain on top of the standings. However, that could change after Saturday’s Inter Milan vs Napoli match.

According to soccer news reports, bookmakers expect it to be a close match as they listed the game as a pick ’em.

Inter Milan vs Napoli Serie A Betting Prediction and Pick 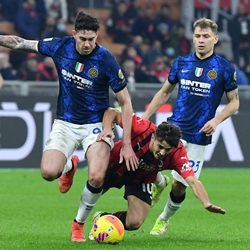 Since losing to Fiorentina in the round of 16 of Coppa Italia, Napoli won three straight games. Also, they are back in the running of the Serie A title. Last weekend, Victor Osimhen returned to Napoli’s roster. He scored the team’s first two goals against Venezia. The team hopes that Osimhem will be in good form when they face Inter Milan.

Napoli attracted many bettors as they became one of the title contenders. Also, they will face Barcelona at the Europa League knockout stage.

AC Milan is a point behind Inter Milan. On the other hand, Napoli has a series of challenging matches in the upcoming weeks, including games against AC Mian and Lazio. Earning three points against Inter Milan is a priority for Luciano Spalleti’s squad.

The good news is that Kalidou Koulibaly and Andre Zambo Anguissa will be back on Napoli’s roster. The former led Senegal to their first AFCON championship after winning against Egypt in penalties. Knowing the available roster is one lesson to learn when becoming a bookie.

While the two teams might not score five goals, they are likely to have more than 2.5 goals.

Start a sportsbook with PricePerPlayer.com today!