The 2021 Mubadala World Tennis Championships began well on Thursday as former world No. 1 Andy Murray won an all-British encounter with countryman Dan Evans, 6-3, 6-2. Murray will next face rival Rafael Nadal for a spot in the final. Many from us here at CasinosGeorgia.com know how exciting the next match will be for the two tennis greats.

“I played one great match against Nadal here,” Murray recalled before the event began. “We played one really tough match, a sort of epic match, and another where I won very comfortably, and it was probably one of the best matches I’ve ever played over the years.” For those who want to cash in on the betting action between two of tennis’ biggest stars in the future, you may be interested in reading these sportsbook pay per head reviews. From here, you can find a pph software to help you start your own sportsbook. 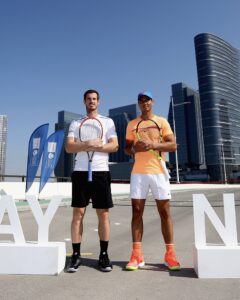 Nadal received a bye into the last four, and is set to play his first match since shutting down his season following an early exit at the Citi Open due to a foot injury. The two last played an ATP tour match all the way back in 2016, when Murray scored a rare clay-court victory over Nadal at the Mutua Madrid Open. Murray went on to win a second Wimbledon and Olympic title that season, ending the year at No. 1.

“Obviously with the injuries and stuff I’ve had the last year, it would be great to get the opportunity to play against him in a competitive match,” Murray said. The second semifinal will take place between top seed Andrey Rublev and No. 3 seed Denis Shapovalov, who dropped just three games to BNP Paribas Open semifinalist Taylor Fritz to advance, 6-3, 6-0. Meanwhile, Fritz and Evans will face off in a fifth-place match on Friday.

Get the Best Bookie Software with EasyPayPerHead.com HERE!